ATLANTA (March 23, 2022) – The premier domestic event of the rugby season, USA Rugby 7s Collegiate Championships (R7CC), will take place at Kennesaw State University’s (KSU) Fifth Third Bank Stadium from May 14th through 15th, 2022. R7CC is the official national championship tournament for both men’s and women’s collegiate 7s and will be broadcast live on NBC, CNBC, and Peacock.

The tournament will include over 60 teams across three division tiers. Men’s teams will be broken into Gold (D1A), Red (D1 Club), and Blue (D2) divisions while women’s teams will compete in Gold (D1 Elite and NIRA), Red (D1), and Blue (D2). With the completion of recent qualifier tournaments, event organizers are excited to announce the first group of confirmed teams across the men’s and women’s divisions. The subsequent rounds of competing teams will be announced over the next several weeks as regional and conference qualifiers are completed. 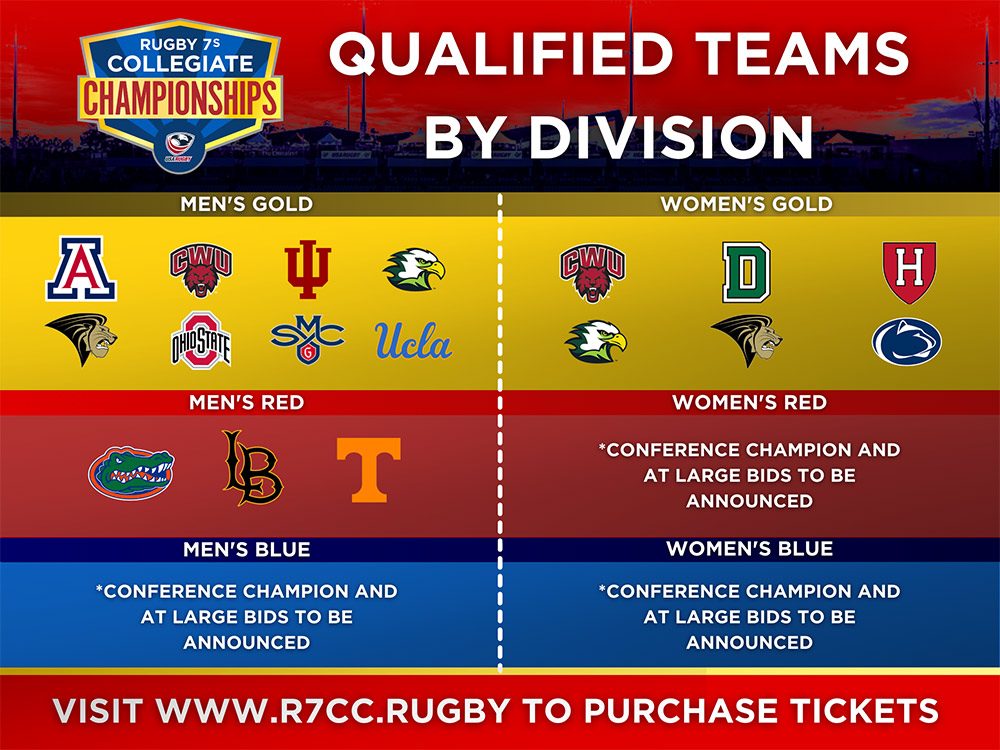 Tickets for the USA Rugby 7s Collegiate Championships are on sale now. 2-day passes start at $49 for adults and $25 for children. Single day tickets start at $35 for adults and $18 for children. Groups of 10 or more can buy tickets at a discounted rate of $22 per day for adult, $12 per day for children, and will enjoy exclusive fan experience opportunities. Presale ticket prices are valid through March 31, 2022. Ticket prices will increase on April 1, 2022.

Established in 1975, USA Rugby is the governing body for the sport of rugby in America and a Full Sport Member of the United States Olympic Committee. Currently headquartered in Glendale, Colorado, USA Rugby is charged with developing the game on all levels and has more than 110,000 active members across the Youth, High School, College and Senior club level. USA Rugby oversees four national teams, multiple development sides, and an emerging Olympic pathway for elite athletes. USA Rugby affiliates also hosts more than 30 national playoff and championship events each year. In 2018, USA Rugby welcomed the world for Rugby World Cup Sevens in San Francisco, the first-ever Rugby World Cup hosted on American soil. With over 100,000 in attendance, the event broke various American records and has acted as a launching point for the game’s future growth. Visit www.usa.rugby for more information.

Headquartered in Los Angeles, California, AEG is the world's leading sports and live entertainment company. The company operates in the following business segments: Facilities, which through its affiliation with ASM Global, owns, manages, or consults with more than 300 preeminent arenas, stadiums, convention centers, and performing arts venues around the world; Music through AEG Presents, which is dedicated to all aspects of live contemporary music performances, including producing and promoting global and regional concert tours, music, and special events, and world-renowned festivals such as the Coachella Valley Music and Arts Festival; Real Estate, which develops world-class venues, as well as major sports and entertainment districts like Crypto.com Arena and L.A. LIVE, Mercedes Platz in Berlin, and The O2 in London; Sports, as the world's largest operator of high-profile sporting events and sports franchises including the LA Kings, LA Galaxy, and Eisbären Berlin; and Global Partnerships, which oversees worldwide sales and servicing of sponsorships including naming rights, premium seating, and other strategic partnerships. Through its worldwide network of venues, portfolio of powerful sports and music brands, and its integrated entertainment districts, AEG entertains more than 160 million guests annually. More information about AEG can be found at www.aegworldwide.com.

NR7s is an Atlanta-based organization whose mission is to elevate the status of Rugby 7s in America through events like R7CC. NR7s is owned and operated by real estate executives David Branch and Armand Vari as well as Bernie Mullin and The Aspire Group, an award-winning  sports and entertainment marketing firm that is globally recognized for innovative ticket and sponsorship sales, consulting, and research services. Aspire created the outsourced ticket sales niche, revolutionizing intercollegiate athletics with the first Fan Relationship Management Center (FRMC) at Georgia Tech in 2009. Over the past twelve years, more than 280 collegiate and professional sports properties have trusted Aspire to drive revenue, attendance, and enterprise-value growth through the combination of marketing, strategic consulting, and research services and best-in-industry fan relationship management. For more information about The Aspire Group visit: www.theaspiregroupinc.com and follow us on Twitter @theaspire_group